skip to main | skip to sidebar

Without delving into any possible reasons that may have caused a Late-Life, Self-Induced, Oppositional/Defiant Color Disorder, let me just say that for quite some time now, I prefer to be surrounded (house, clothes, office, vehicle) by NO red, orange, yellow, green, blue, indigo or violet. My rainbow of choice would be shades of black, gray, brown, and white....with the possible inclusion of olive drab in the brown department, and dark navy blue that looks like black.

I share this anomaly because we are approaching the time when the outside paint color will be chosen for the house.....and this may also be the time for possible conflict or the time for some polychromatic (thesaurus word) intervention. Or both.

Jason and Michael have been aware of this idiosyncratic issue from the very beginning of our relationship, and have been very professional and accepting for the most part......give or take the occasional smart remark about red shag rugs. Lately, however, they have said things like, "We need to start thinking about the color of your house" and, "We have seen some interesting paint chips that we think would be really nice on the outside of the containers". (All the while, exchanging cautious, yet knowing glances between themselves.) And so, it begins.

On a recent photographic outing with The Springfield Business Journal, during the worst weather and road conditions possible, Aaron Scott was privy to one of these non-colorful discussions on our way back to town. In the spirit of mediation and safe-driving, he remarked, "How about Mossy Oak?" (Not bad for a first-timer.) Later, that same day Natalie Mardis leaned forward with sparkling eyes and said, "Smoky Pumpkin.....not really a color....more like a shade. Smoky Pumpkin." (I'm sure she was well-coached.) And Jason and Michael keep bringing up orange.

My friend David has the best approach...even though he lives in California (and we all know about people in California and their ideas about color). He agrees with my "less (color) is more (better)" theory and selected colors that were actually visible in some of the blog pictures....dirt.....gravel....the hill across the river......dead grass....he even mentioned the eagle that has been visiting the house site (possibly attracted by a dead deer in the nearby field, according to Todd).....that may or may not have been color-related.

P.S. Before writing this, in my never-ending quest for self-actualization, I typed in "AVERSION TO COLOR" on Google, and found a most interesting site all about chromotherapy. www.deeptrancenow.com (It said I was mostly okay.)
Posted by Marti at 1:52 PM 5 comments:

I have loved every minute of this interest and attention and thank anyone who took the time to comment about this project. It made me more aware of how thoughtful it is to merely look at and listen to what else is going on in the world. I could do a whole lot more of that myself, and will from now on. Thank you.

So.....now the HVAC system is being installed on the roof.....the coils for the radiant heating were put down, the concrete floors were poured, and as the sun was setting over Panther Creek yesterday, Todd was bundled up, all by himself, applying some potent sealer stuff (probably addictive) on top of the concrete and making very polite conversation with a neighbor who dropped by to see what was happening. (Or maybe he was just attracted by the fumes........both Todd and the neighbor seemed in excellent spirits.) 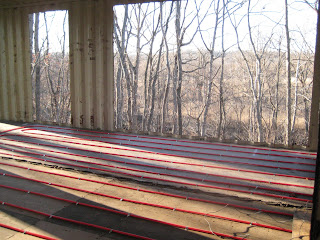 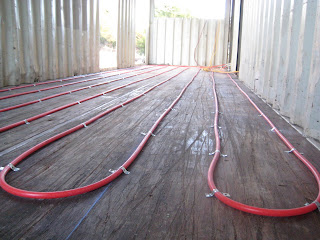 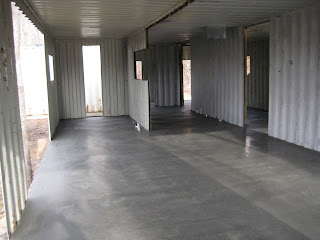 Thursday had to be one of the top five days of my life. I can't put it into words.....I can't begin to describe my feelings.....I can't put enough sentences together to make sense out of seeing something I have wanted for so long and have wanted so much come to fruition before my very eyes. It was and is too much. Too much.

For starters, just look at those pictures that Jason posted on the last blog.....double click each one to make it bigger.....and just see if you don't get goose bumps.

It would be too much blather to try and give you a play-by-play, but a guy in a crane with tinted windows (I'll have to get his name) that you could see for miles away would pick up a shipping container, gently move it over the piers,lower it very slowly, release it, do a sort of arabesque ballet turn to the left while Todd would have his welder (and newest employee) start welding it in place.......then Todd would do his high wire act on top of the next container, hooking the crane to the corners of the container top, sashay (or maybe it was more like a tour jete') down to go to the next one. And the crane man would do his dance again. This ballet was repeated four times, without a hitch, and the only thing missing was a symphony orchestra to accompany this moving and dramatic experience in the mud.

In probably less than four hours, a few good men had turned four shipping containers (that had yet to attract a wasp nest or a transient) into the house that, when finished, will take your breath away. Less than four hours.

Now, when I last wrote, I was a little mealy-mouthed about sending out the news release.....wondering if anyone would show up. HAH! This has become one of those "be careful what you wish for" deals that is downright amazing.....and I couldn't be happier. The only person I haven't heard from, is Oprah, herself.....but I'm ready to tell my WHOLE LIFE STORY when she calls. And I will be naming names.

Donna, from the News-Leader, was there with her camera and tape recorder and got the best parking place.....and probably more pictures and more words and more emotions than a person or paper could ever use. Joel, from KSPR, was there filming AND interviewing....at the same time. And Chad and his camera man from KY3 were there in time to not only stand inside the future living room and look down at the river through the would-be door/window, but must have been all over the place taking pictures and talking to folks and having a great time doing it.

Here is the KY3 story: Living in a box: architects create unique home in Webster County

As a result, there has been an unbelievable....and I mean UNBELIEVABLE reaction to what has been aired. Keyway Construction, theworkshop 308 and I would like to
express much gratitude for the way in which the project was presented by the media, for the fact that it WAS presented, and in turn, for the response by those who were reached by the coverage. If I had written this yesterday, I would be speaking "regionally". After learning, this morning from a phone call or two, that it was aired on CNN / HNN's Morning Express with Robin Meade, and maybe MSNBC, I am now speaking "globally". So, what do you think about that?

There are some serious issues to be studied here. Too bad my brain is mostly mush these days or I'd study them. Sending out press releases isn't exactly in my comfort zone nor my normal realm of experience these days, but, in this case, it felt both thrilling and educational. Strange combination, huh? And the news sources must have agreed. The project itself has such validity where cost, efficiency, practicality and design are concerned......and the people who are making it possible are of the highest, most interesting, most ethical and most talented caliber you could ever find. Seems like the world is hungry for each of these elements.....and they can be found right in our own back yard.

One of the top five days of my life. That's a pretty big deal. Thank you.

P.S. One person who responded to the television report was Janice Harrison of ConGlobal Industries in Memphis. She was disappointed that I had never mentioned that the shipping containers were purchased from her company. She also included a website with a great slide show that features some very creative uses of shipping containers. (No wasp nests, no transients.) Maybe the 8747house will be included in that slide show one of these days. jharrison@cgini.com
Posted by Marti at 5:40 PM 3 comments: 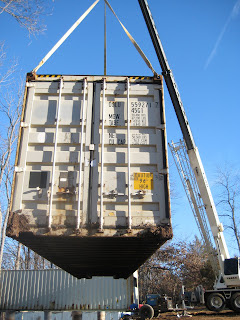 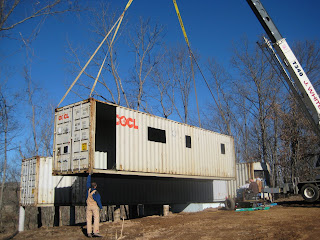 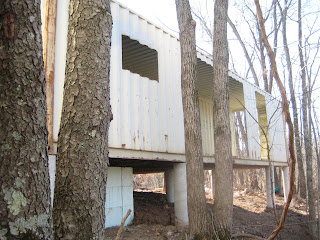 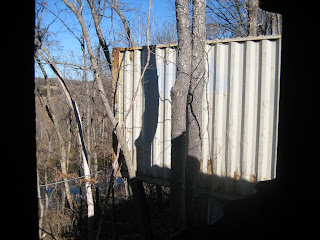 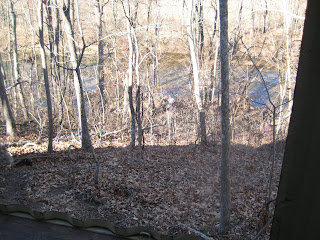 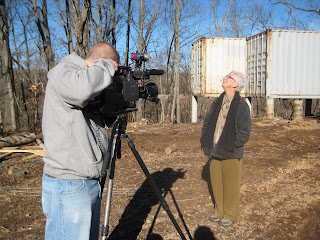 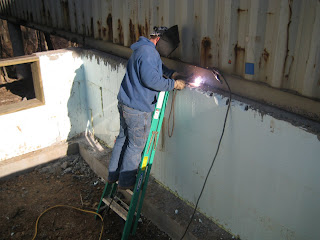 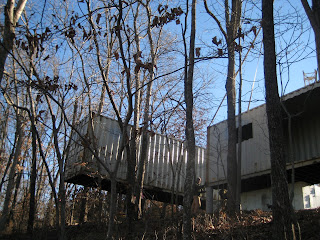 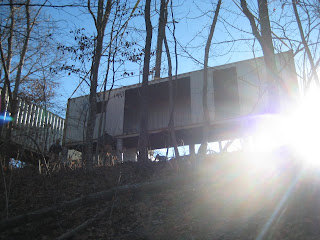 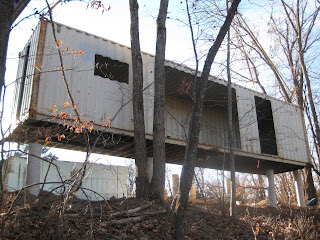 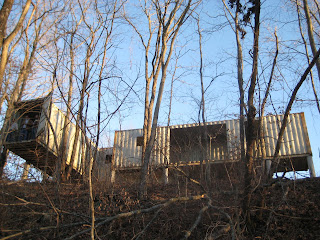 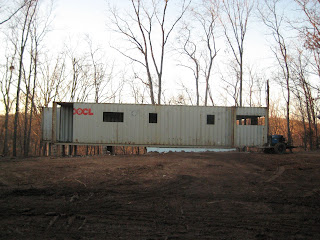 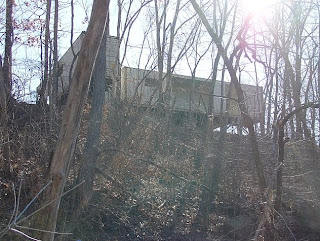 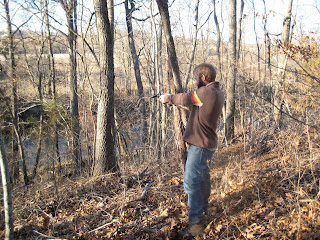 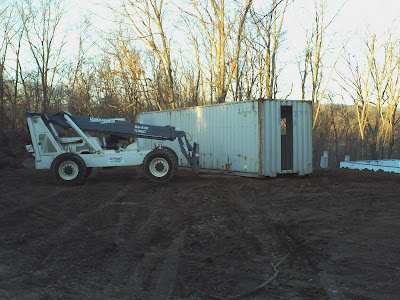 As momentum builds....electric ditch.....well-drilling.....dirt smoothing....plans to move the containers to the site.....crane-booking to hoist them up to the piers.....a frenzy of activity in my otherwise predictable life.....I determined that this was definitely news-worthy, by any standards. This was a media event. I checked with theworkshop 308, they said to go ahead, and I typed up a press release and sent it out to television stations and some newspapers; Jason added a rendering and some photos, and I sent it out again. No one else around here, that I know of, is building a house from shipping containers. And when that crane arrives tomorrow and starts lifting them up and placing them on the concrete piers, now that will be something to see. It's not exactly TIME or NEWSWEEK, but it's not your everyday Shriner parade either.

It will be interesting to see if anyone else shows up, but a very nice person from The News-Leader called today to say that she would sure be there and hopes to get a picture of a container swinging from the crane as it is put into place; and I heard that KSPR may be in attendance.

Yesterday it was Carharts and muddy boots.....tomorrow it's power suits and pumps. My career as the world's oldest living truant officer may be coming to an end. I may be Webster County's newest media "personality". Whooee.
Posted by Marti at 6:38 PM 2 comments:

This is only a test. Please stand by. I just wanted to see if I could figure out how to 1) take a picture with my $60.00 Sears camera, 2) put it on the computer with the USB card that was EXTRA, 3) find it again, and 4) put it on this bllllllog page like Natalie showed me.....a long time ago.

Picture or not, it was pretty darned exciting when I drove out to the house site the other day....just to tromp around and check on the concrete piers and the ditch for the power stuff....(my idea of cheap thrills)....and when I got to the top of the last hill before the driveway I saw this magnificent, towering piece of equipment....roaring through the atmosphere like there was no tomorrow. I jumped out of my truck and they (Garrett-the-bull-dozer-man, and Todd, and Garrett's cousin and some other people) were drilling the well. Drilling the well. Pretty darned exciting. I felt like Elizabeth Taylor watching James Dean. And if that wasn't enough, here came Webster Electric to finish hooking up the transformer (or some such big deal) with enough manpower and flag men and pylons to do a routine for the Olympic Games. Impressive, to say the least. I had to get their permission, with a nod and a wave, to pull out and go home when I was ready. It's a miracle. Everyone seems to know exactly what they are doing. Everyone.

Now, let's see if that picture of the drilling rig appears.....yeah, I'm calling it a rig. 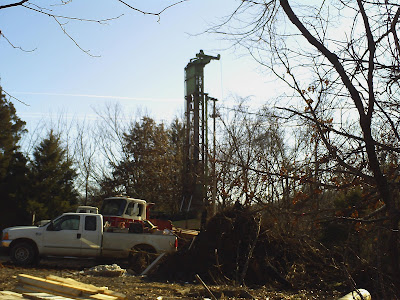 This is a Flickr badge showing items in a set called the 8747 house construction photos. Make your own badge here.

Thank you sir, I'll have another. 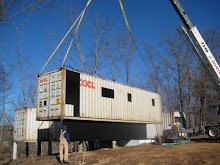 it's a beautiful thing. 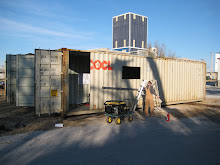 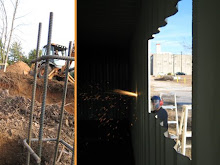 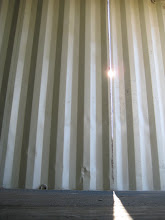 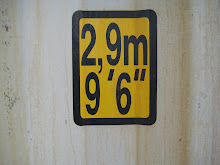 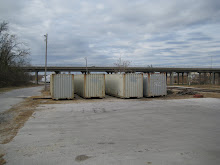 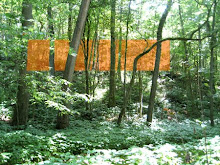 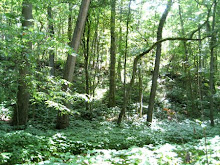